Arch Linux with GNOME on the Surface Pro 3

Recently, I acquired a Surface Pro 3 for a great deal. I was looking for a small computing device and wanted something I could run desktop Linux on, so an Android tablet or Chromebook were out of the race already.

I settled on the SP3 for a couple reasons:

So far it has been completely usable and really handy as my companion device when playing D&D.

These are some notes and tweaks based on running Arch Linux on the SP3 with GNOME as the desktop environment.

A handy feature since GNOME 3.36 (albeit experimental and only in Wayland) is fractional scaling.

It can easily be enabled with the following command:

If you want bluetooth available on boot, enable it, since it may not be already.

Only a single package needs to be installed to enable screen rotation when the surface is rotated.

GNOME will now display a button for (un)locking screen rotation. 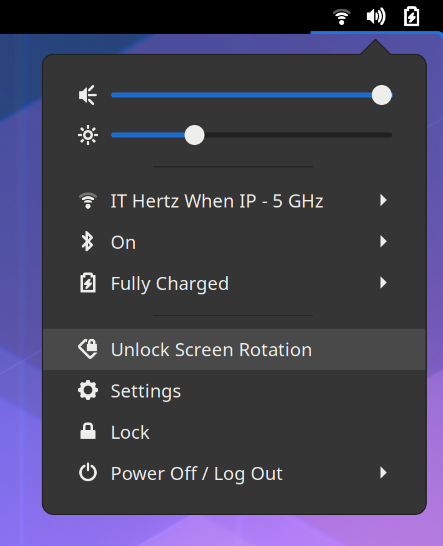 Firefox’s touch support is still finicky, so for most of my browsing I use GNOME Web.

GNOME Web still has a way to go as a browser, but there’s a lot to like about it. Especially the touch gestures.

While I’m no artists, I have a surface pen and it works with no issue.

I’ve played around with MyPaint and the pen works as expected, specifically erasing when flipped around.